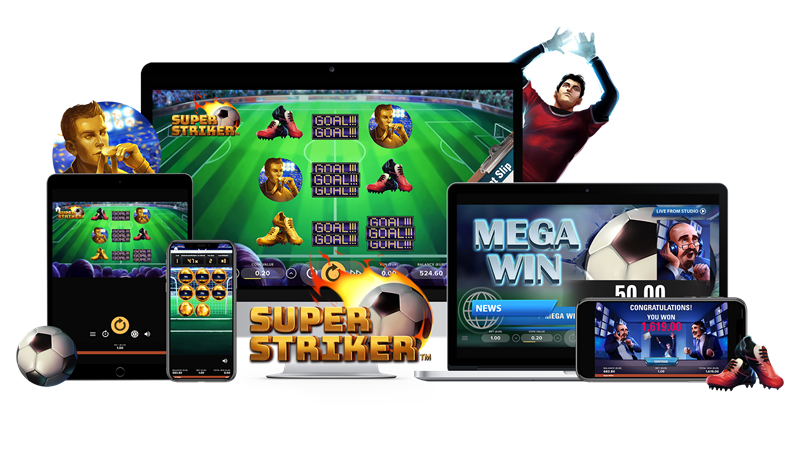 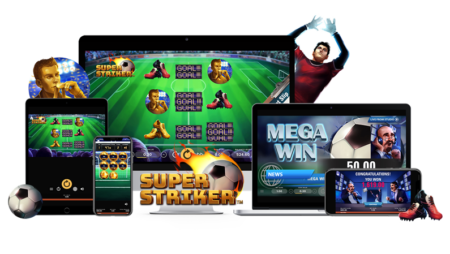 The action takes place in a 3×3 grid with plenty of footy symbols, plus a bonus game packed with amazing multipliers and multiple stages.

And if that's not enough to fill your boots, there's even a Bet Slip Feature offering additional side bets. 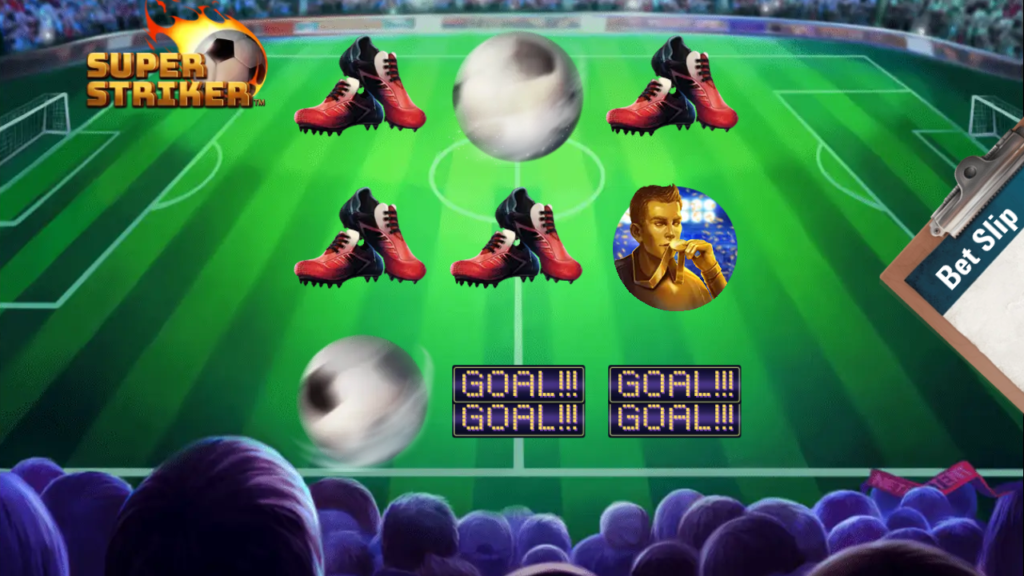 All of the Super Striker symbols are football-themed and divided between high, medium, and low paying.

High paying symbol: The highest paying symbol is the Golden Player. When three land anywhere on the reels in the main game you'll earn 100x your bet. 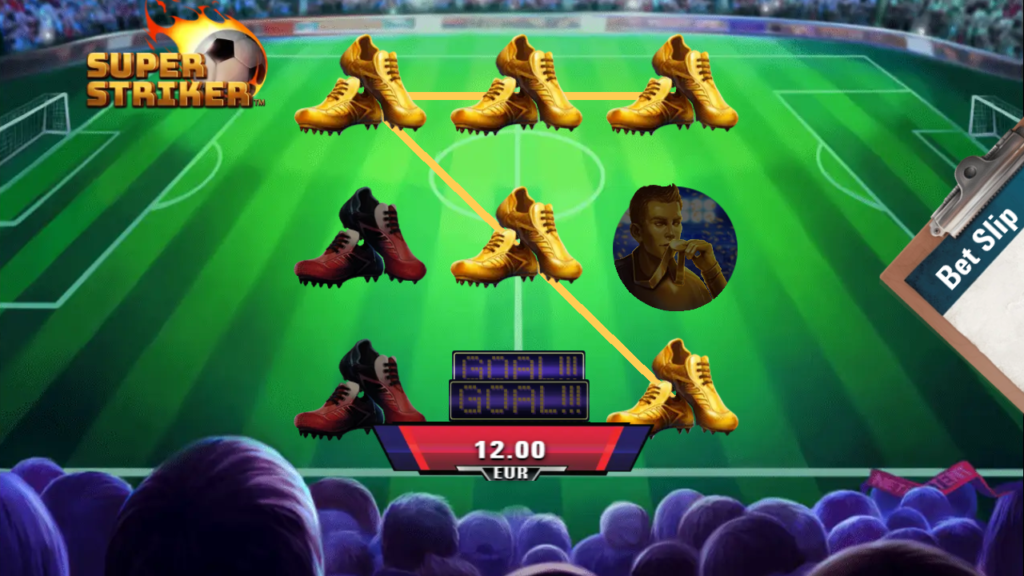 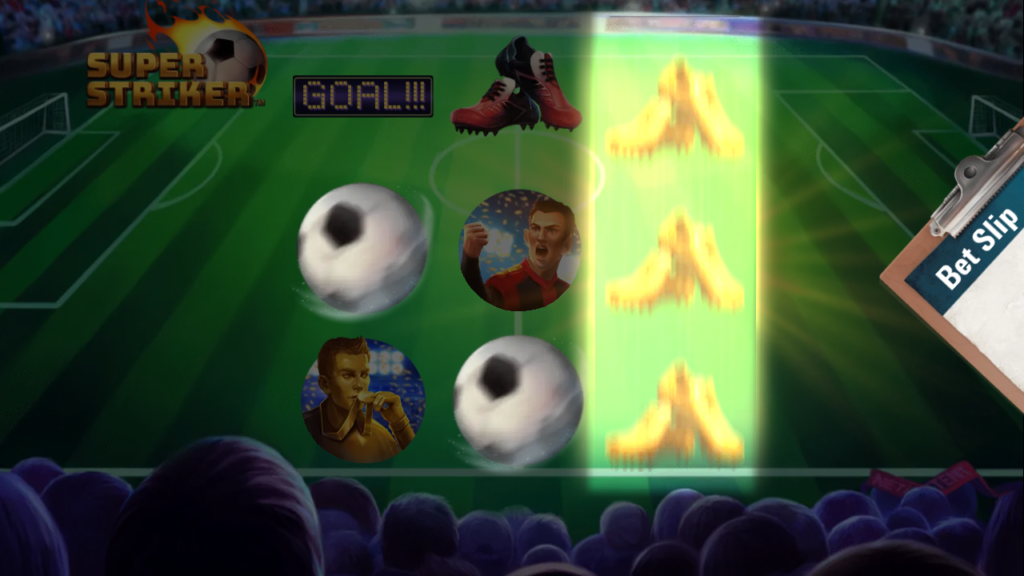 There's no wild symbol in Super Striker, but there are two unique Scatter symbols to keep your eyes peeled for.

Gold Scatter: Can land anywhere on the slot's reels in the base game. When it hits, it will reveal a 10x or 20x multiplier which is applied to your total wager. 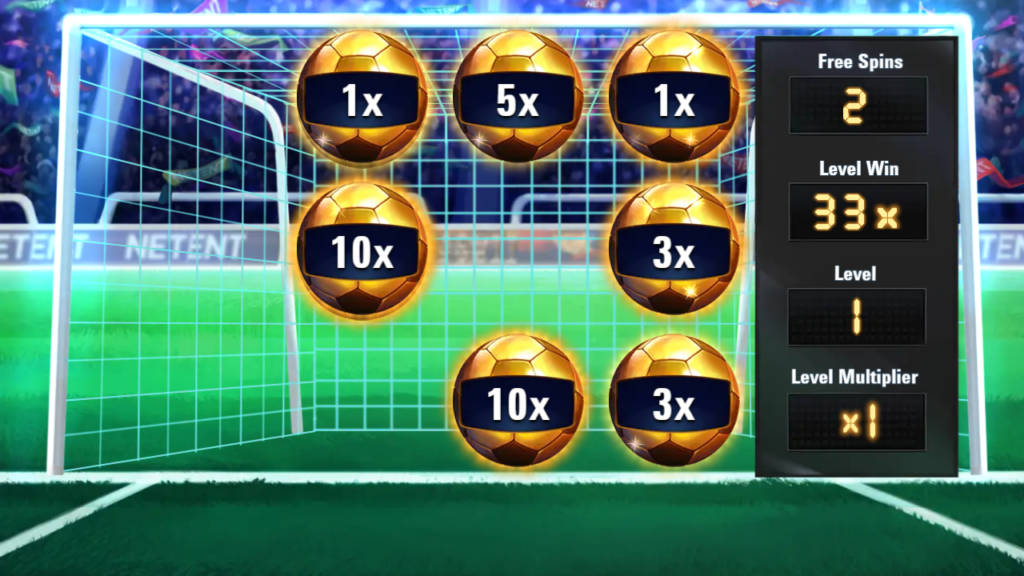 Step up to the penalty spot for the Free Spin round!

During the bonus feature, you'll receive three free spins. Only Golden Scatter symbols can appear on the reels, and each symbol contains a random multiplier between 1x-50x.

Your goal is to fill the reels completely with Golden Scatters and advance to the next level before your starting three free spins run out. Each time a Golden Scatter lands successfully, you'll earn another free spin.

You can progress through 5 levels, and each time you gain a level you'll earn another multiplier applied to your winnings. It stays at 1x and goes up to 10x in the final round.

Super Striker also features a side game called the Bet Slip Feature. The Bet Slip allows you to place a wager on the number of times a symbol appears within a set number of spins.

To use the Bet Slip Feature:

What NetEnt Said about Super Striker

“we wanted to give fans something to keep them excited when football returns. Our unique betslip feature returns with bets crafted specifically for this game which adds that extra reason to play and thrills when those bets come in. Super Striker TM is a classic and simple game that we designed to attract any sports fan – including those new to slots and those looking for something else to do during the bleak sports betting calendar today. Chase those Golden Scatters and score some big numbers!”

One Reply to “Super Striker by Netent (New Slot)”