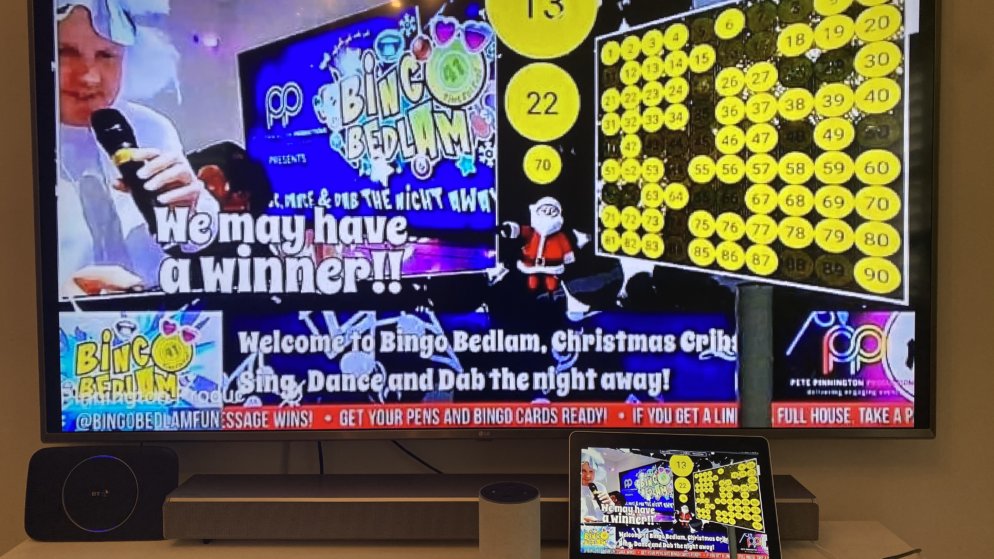 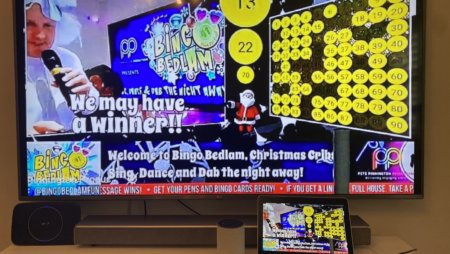 One of the few perks of running BingoDaily is that every now and again we get the opportunity to try out a new bingo site, game or attend a bingo event.

Last Saturday, we had the pleasure of attending Bingo Bedlam, an online bingo event run by Warrington legend Pete Pinnington. Having reported on the thousands of pounds Pete and his online bingo sessions have raised for Warrington charities including The Shannon Bradshaw Trust, Warrington Disability Partnership and JUMP Children’s Charity, we thought we'd see what all the fuss was about. So, without further ado, here is our review of Bingo Bedlam.

Having attended a few online bingo events, most notably, musical cribs, we weren't sure what to expect. Signing up through the Bingo Bedlam Facebook page was very easy, with a link and bingo cards sent via email. It was the first online bingo event we've attended on Microsoft Teams and was pleasantly surprised how easy the virtual platform is to use.

The session kicked off with around just under 100 screens filled with players from all over the UK. Our host, Pete, looking like a cross between a mad scientist and Mr Tumble, then expertly guided through Bingo Bedlam.

Pete has a very amiable and warm persona. He instantly puts people at ease with his friendly and funny banter which is definitely suitable for the families.

The bingo games went smoothly, interspersed with some wacky tasks and a lively soundtrack mostly chosen by the attendees. Prizes dished out included alcohol, chocolates and some very cool items donated by local businesses.

The atmosphere felt was definitely that one of a group of friends playing bingo together.  This wasn't some slick, corporate event that can have a tendency to be a little soulless at times. Even though this was our first (and hopefully not last) time at Bingo Bedlam, thanks to Pete, we felt very much at home. It was a relaxed and fun evening in the company of ‘friends.' In the chats, the friendliness continued and there wasn't any of the competitiveness you sometimes see at bingo games.

Overall, a very enjoyable evening and well worth a fiver of anyone's money. A big bonus is that as well as having some ol' wholesome bingo fun, you are raising money for charity – a win-win.

After the event, BingoDaily got the chance to pose a few questions to Pete:

BD: What was the hardest part about taking the Bingo Bedlam Show online?

Pete: ​The hardest part has definitely been to not only find the right stable platform to stream the show but how best to adapt the show to appeal to an online audience. I also didn't want the players to feel like they sit down, listen for the numbers and watch me perform. The players are just as much a part of the show as I am hosting it. To ensure this could happen, I tweaked my show to encourage lots more fun and engagement.

​BD: What do you enjoy most about doing the online experience?

Pete: ​I really miss the live audience experience but watching my players post photos/videos of themselves on our Facebook page of them playing/dancing along with lots of great feedback on the experience is my reward. Mixed with the fact that all ticket sales are going to the three local charities I designate.
​

BD: How much have you raised so far and for which charities? ​

Pete: After 3 shows, we've raised £2,500 which gets split between The Warrington Disability Partnership, The Shannon Bradshaw Trust & JUMP Children's Charity.
Where do the prizes come from? Donated locally? ​So far, all of the prizes have been donated by the charities and myself. Although, we are beginning to get some great prize donations made by some of the players.

BD: Finally, You are a legend in the North West, any plans to expand further afield? ​

Pete: There's nothing I would LOVE more than to have people playing along from all parts of the UK and abroad. Hopefully, it's going that way because we do have some players from Scotland, Portsmouth & Kent playing along. We're online, so we're global.

A big thanks to Pete and the team at Bingo Bedlam. Carry on the great work and if anyone is interested (we highly recommend) – check out the Bingo Bedlam Facebook page here –