A new tiered approach was announced by the British government on Thursday which will see nearly all of England facing tougher restrictions once the national lockdown ends on December the 2nd.

From a bingo hall perspective, all bingo halls in tier 3 areas will be forced to close for at least 14 days. More than 23 million people spread across 21 local authority areas will be in tier three. The areas placed in tier 3 today are most of the Midlands, the North East and the North West, including Manchester, as well as Kent.

Bingo halls in these areas will stay closed on December 2nd and the earliest they will be allowed to open could be on the 16th of December following a scheduled government review.

Not that the weather would likely permit, but games of street bingo would also be ruled out as you are also not allowed to socialise in a group of more than six in most outdoor public spaces.

What you need to know about Tier 3: Very High Alert ?

Bingo halls in tier 1 and tier 2 areas can only serve alcohol with substantial meals, must provide table service only, stop taking orders at 10 pm and close at 11 pm.

Just three areas are in the lowest tier: 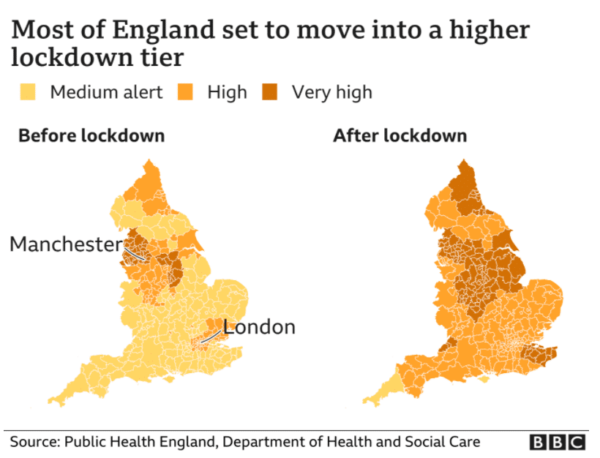 With the next review scheduled 14 days after the lockdown ends on December the 2nd, and a further two weeks of closure at least for most of England, the pressure is mounting on the UK bingo and gambling industry.

BingoDaily estimates up to 20% of the bingo halls have closed in 2020 due to the impact of the pandemic. Whilst online bingo has seen a strong uptake, bingo halls have seen reduced numbers even when open post-first-lockdown.

Let's hope the UK infection rate lowers and we see bingo halls in tier 3 reopen on the 16th December, in time for Christmas.