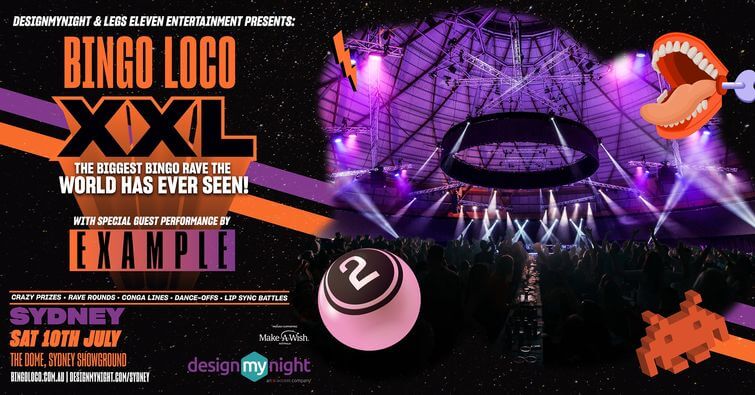 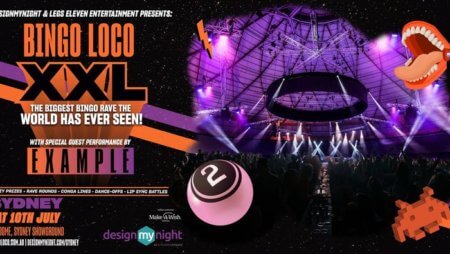 Whilst most of us are looking forward to returning to our favourite bingo halls next week, Australians get to look forward to what is being billed as the world's biggest bingo rave.

Bingo Loco XXL is planning a bingo rave extravaganza at The Dome in Sydney Showground on Saturday, 10th July. In what promises to be an evening to remember, the event is being headlined by none other than Britain's own Example. The English rapper, real name Elliot John Gleave. Example first rose to prominence with the release of his second studio album, Won't Go Quietly, which hit number four on the UK Albums Chart and reached number one on the UK Dance Chart.

The fun-packed night will consist of rave rounds, lip-sync battles, dance-offs, comedian MCs, confetti showers, fireworks,  and some absolutely insane secret prizes. Prizes in the past have included trips to Las Vegas,  a convertible car, Coachella Festival, and even a boat!

Bingo Loco has partnered with DesignMyNight the discovery and booking platform to create the ‘world’s biggest ever bingo rave'. Bingo Loco has also partnered with Make-A-Wish Australia. Proceeds from the event will go towards helping create life-changing wishes for children with critical illnesses.

“Bingo Loco’s popularity stems from people wanting more out of their night out. We combine a comedy show, a warehouse rave, a theatre performance, a concert, a game of trivia and bingo all together complete with festival level production, special effects and crowd participation.

“Can’t wait to do it with 3000 people and hold the largest bingo rave the world has ever seen”.