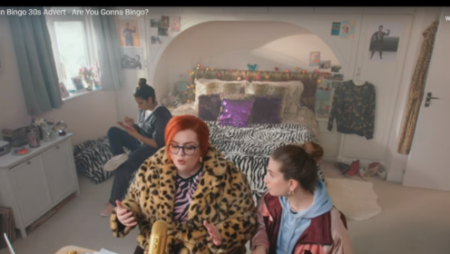 Following on from the roaring success of 2018's Are You Gonna Bingo campaign, which dominated bingo news, Sun Bingo have teamed up with The&Partnership and Pulse Creative, the News UK's onsite agency, along with comic Jayde Adams to produce a new vlog. The seven minute production is called The world’s first Sun Bingo Vlog.

This year sees Jaz, played by Adams, create her own vlog centred around bingo. It is filmed in Jaz's bedroom with the reluctant assistance of her two BFFs.

The show promises some first class highjinx, shenanigans and tomfoolery, with characters such as Mystic Megan who has an uncanny ability in NOT predicting the balls being called. There is also Ted, described as a “legend in the bingo community” whose section ‘Ted Talks' rather amusingly goes pear shaped as he suffers a bit of camera shyness.

There's updates on the petition for square bingo (up to 19 signatures), and there are also competitions with prizes found in garage being dished out.

If you want a taste of the new Sun Bingo Vlog, here is a two minute tease:

Sun Bingo is one of the UK's biggest and best bingo operators. Launched in 2006, it sponsored The Jeremy Kyle Show from July 2018 to May this year when the show was pulled from the airwaves.