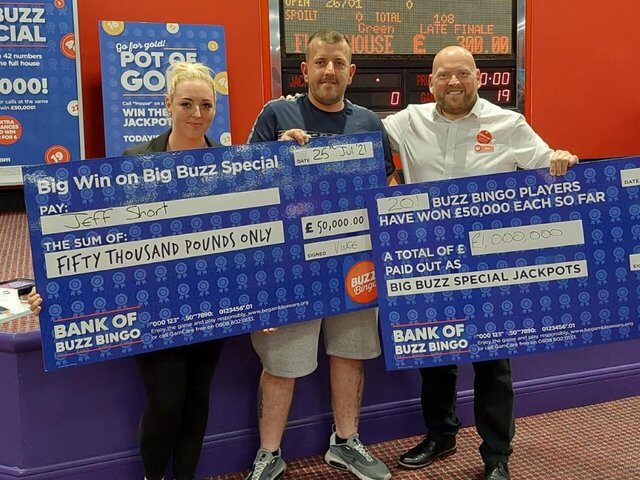 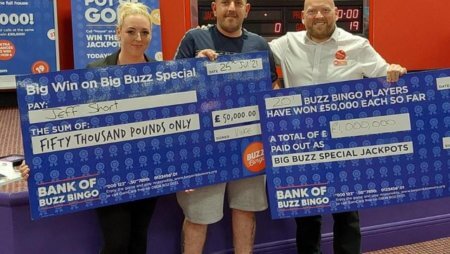 Since Bingo clubs reopened on May 17th, more money has been won at Buzz Bingo clubs than any other bingo chain.

Jeff is a regular bingo player and has visited his local club almost every weekend since it reopened on 17th May. During the lockdown, Jeff and his partner Hollie decided to set up their own business in logistics, delivering items for online firms and independent businesses.  Now, with a whopping £50,000 in the bank, Jeff hopes to build on his new venture and create a legacy for his children.

A delighted Jeff said of his win: “I couldn’t believe it when I found out I had won the Big Buzz Special jackpot! I’ve been playing at Buzz for many years but never have I won this amount. It’s come at the perfect timing for me and my family as we’ve been working hard on our business during the lockdown. It’s going to be a big celebration for us now!”

The Big Buzz Special jackpot gives Buzz Bingo players the opportunity to win £50,000 and the full house prize if they call “House” in 42 numbers or less. If two players win at the same time, they both get £50k – guaranteed. Customers get one ticket included on the main event, but if you want more chances to win you can add on an extra six tickets for just £1.

Vince Watson, Club Manager at Buzz Bingo South Shields, said of the win: “We couldn’t be happier for Jeff and his fantastic win! What made it even more special was the fact that he was the 20th winner meaning £1million has now been won on the Big Buzz Special. The whole team and all the customers in the club started cheering from their seats – it was such an exciting moment.”

Peter Brigden, Chief Retail Officer at Buzz Bingo, who operate 91 Bingo clubs in the UK as well as one of the biggest and best bingo sites online, added: “The atmosphere in the club when there’s a big win is always incredible, and we’re delighted that South Shields saw the 20th Buzz Bingo player win this £50k jackpot since clubs re-opened in May, that’s 2 winners a week which is incredible! Overall Buzz Bingo players win more than £2m per week in bingo prize money and have won over £1m in Big Buzz Special jackpots. It’s great to celebrate a win and have the rest of the bingo community celebrate that too!”