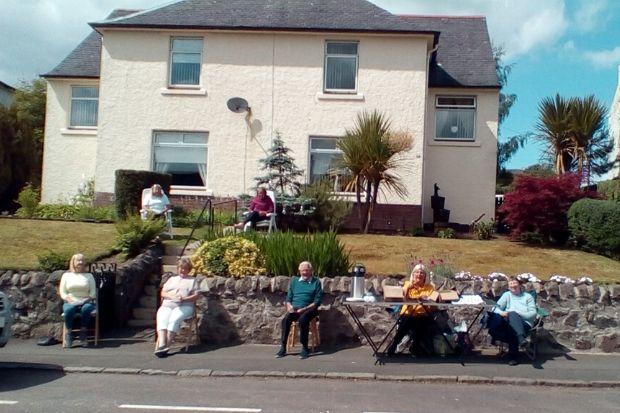 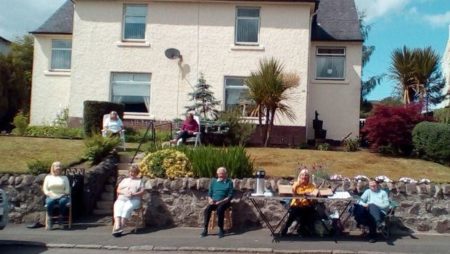 In the little village of Bridge of Weir in Renfrewshire, Scotland, the residents of Houston Road have been meeting outside their homes, respecting social distance regulations every week for the past four weeks to play games of street bingo.

Every Friday, the residents aged from 40 to 90, having donated £3 to take part every week, bring their own chairs and plonk themselves down outside their homes or on the pavement.

Diane Hill, 61 has been organising the games of street bingo and also acts as the caller. She said the response has been “fantastic”. Diane told the local paper:

“I went to my neighbours’ doors last month and asked if they fancied a game of bingo, which they thought was a good idea.

“I think it’s been a great thing to do and we all look forward to coming out on a Friday night and talking to everyone.

“As the bingo caller, I have to shout out the numbers so the neighbours at the other side of the road can hear me.”

As well as providing all the bingo cards for the popular event, she also lays on tea, sandwiches, and cake during breaks.

Prizes have been eclectic to say the least, ranging from bottles of wine to anti-bacterial chopping boards.

The games of bingo have not just raised some cheer in the lockdown period but raised hundreds of pounds for worthy causes.

So far, the Houston Road residents have raised £196 for the NHS and £214 for Macmillan Cancer Support.

Diane said: “All the neighbours have been able to have a chat with one another at a safe distance.

“The oldest participant is 90 and he told me he loves taking part. He’s been stuck in the house because of the lockdown and this is a way for him to get out, talk to everyone and have a good laugh.”

“I want to say a huge thank-you to my neighbours for taking part as, without them, this wouldn’t have happened.”

Diane and the Bridge of Weir residents intend to continue the bingo for the foreseeable future. With no word yet on when will the bingo halls reopen in Scotland, we may well see a few more street bingo stories creeping into the bingo news.