The Palace Grand Bingo Nuneaton has confirmed via its social media pages that today October 31st will be the last ever time the popular bingo hall opens its doors.

Having survived the pandemic and subsequent lockdowns, the independent bingo club announced that they were unable to “extend the life” of the bingo club any longer.

BingoDaily estimates between 20 – 30% of all bingo clubs in the UK shuttered for good since the global pandemic hit these shores. With most UK bingo clubs closed for around nine of the 12 months in 2020, the retail bingo industry, along with most of the hospitality industry, found itself devastated by the economic impact of the lockdowns.

“It is with deep regret to announce the closure of The Grand Bingo Club.
“Our last session of trading will be SUNDAY EVENING 31ST OCTOBER.

“We will operate our normal sessions this week and will end with our Halloween Party on Sunday Evening 31st of October.

“Thank you for your magnificent support over the last year and I am sorry we were not able to extend the life of The Grand beyond this last year.

“Thank you for your understanding.”

The demise of Nuneaton’s only independent licensed bingo club was greeted with huge amounts of sadness from its loyal following. Many locals who have been playing at the bingo venue for a number of years expressed surprise too at the shock announcement. 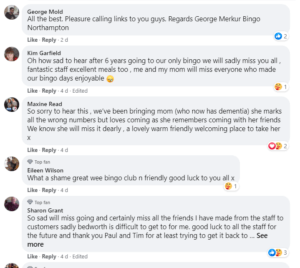 At the time of publishing, there is no word yet on the venue's long-term future, but it would be a great shame to lose yet another popular independent bingo club.