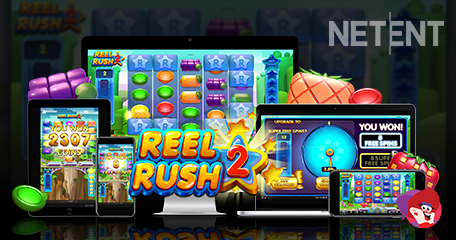 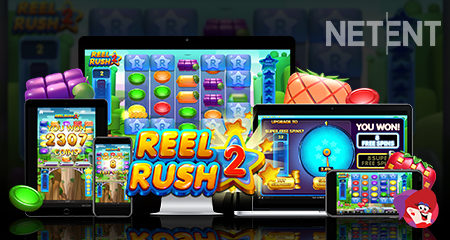 Reel Rush 2 by Netent is a fast-paced 5 reel slot machine with 3125 bet ways. Social games have heavily influenced the game's theme, and the graphics are sharp, bubbly and creative.

The wild symbol can appear on reels 2,3,4 and 5 in both the main game and free spins rounds. Able to substitute for all symbols to help create more winning combinations.

Second Chance – Gives a respin if no winning combinations hit.

Random Wilds – 1-3 wild symbols will land randomly on the reels.

Symbol Upgrade – Upgrades the selected symbol previous to it in the paytable.

Multiplier Boost – The multiplier meter is increased by 1

A winning combination during the main game awards 1 respin, capped at 5 spins. During each spin, the number of betways increases.

Netent continues to release new games each month and commented:

You’re going to love Reel Rush 2! It’s a crazy, colorful world of fruit – and it’s heading your way! Go on and give it a spin!