Historic Empire Bingo Club in Blackpool to Close and Be Demolished 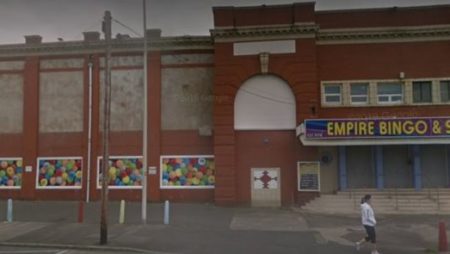 It looks as though sadly we may have the first bingo hall casualty due to coronavirus.

The Empire Bingo Club in Hawes Side Lane, Blackpool, has confirmed that it has now closed permanently with the building, which dates back to 1929, set to be demolished.

The historic Blackpool landmark which started life as a cinema has been in the Bottomley family for the past 46 years. However, with great dismay, the owners confirmed that the lockdown due to the coronavirus pandemic and the restrictions imposed in order to reopen was the final straw for the much-loved bingo hall.

As bingo halls prepare to reopen on July 4th, in England at least, the age of The Empire Bingo Club building meant social distancing and running a viable bingo club was too much of a task for owner Elaine Bottomley and her daughter Linzi.

A statement released by the Bottomley family said:

“The Empire Bingo has been a strong and sturdy social hub for thousands of people over the past 46 years.

“With the same family running the bingo club it created a safe space for many people.

“The customers and staff have always been the driving force behind the bingo successfully owned and run by Elaine Bottomley.

“The Empire has sailed through storms and calm waters, however the tide has now turned and the Empire is moving in a different direction.

“We would like to thank our members who have stuck by the club in the best of times and the worst of times. We wish them all the happiness and we hope they hold onto the best of memories as we will do as a family.”

End of an Era

For many, the closure of The Empire Bingo Club marks an end of an era. John Bottomley, Elaine's late husband, started running bingo clubs including the Apollo on Waterloo Road in the 1960s, as well as another club in Marton at Oxford Square where a Lidl is now located.

Howard Batley, who called the numbers at The Empire Club in two stints over 19 years said of the closure:

“It is very sad news but unfortunately times have changed. Our customers were like our family. We were on first name terms and went the extra mile for them. One lady had been coming here for over 40 years.”

“But a small club like this just couldn’t survive with the social distancing measures which are needed now.”

Linzi added: “My mum always gave the business that extra care, which is why it operated for so long.”

Another Bingo Hall to be Demolished for Homes

Two years ago planning permission was given by the local authorities to convert the building to 14 flats. However, due to the age of the building, this was proved unviable.

An application has now been submitted to demolish the building. Once demolished, new homes are expected to be built on the site.

The closure of bingo halls, many dating back to the 1920s and 1930s, and conversion into flats have been an all-too-familiar trend over the last few years. Prime town and city centre locations and many occupying large sites have made bingo halls, along with the falling bingo club visitor numbers, have made these venues a target for property developers.

It is feared that the coronavirus lockdown and restrictions may end more bingo halls across the UK.