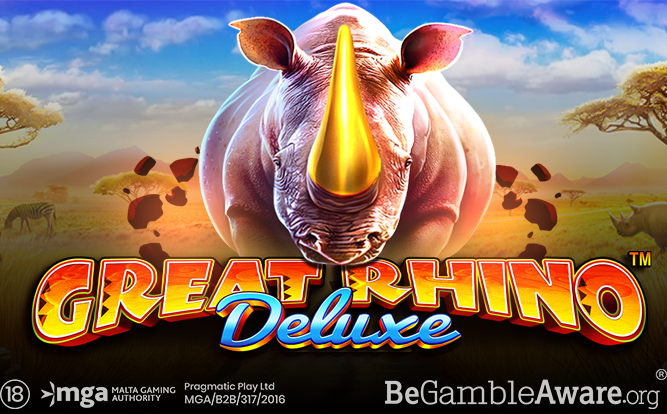 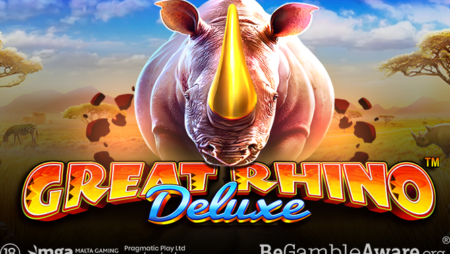 A possible stampede of payouts can be found in Great Rhino Deluxe by Pragmatic Play. The game takes place on the Serengeti in a 3×5 grid. It has 20 paylines, wilds, scatters and two bonus features with some slight twists to make them slightly more interesting than the standard affair.

There's also a 500x fixed jackpot you can trigger by filling the screen with Rhino symbols during the game's super respin feature.

PLAY AT THE SUN PLAY 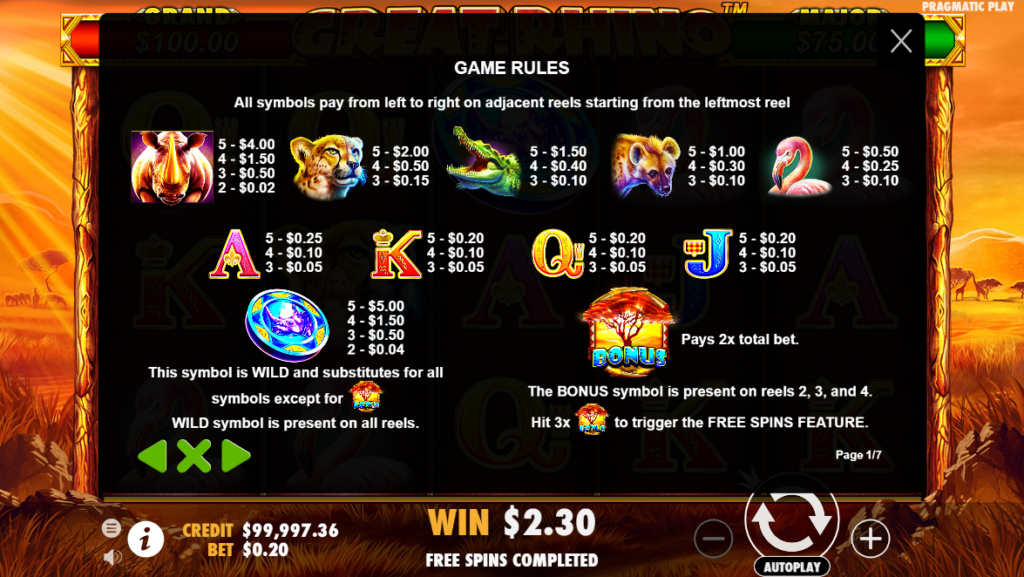 On the game's paytable you'll find plenty of wild, dangerous, and rewarding animal symbols which make up the higher paying symbols:

The lower paying symbols are A-J royal symbols, each with its own unique color palette and cool design:

The Gold Rhino Coin is the game's wild symbol, so it will substitute for all over symbols except the bonus scatter symbols. Plus, it can pay up to 25x your stake if 5 land on a single payline.

On this grand safari adventure, you may end up disappointed by the lack of bonus features. There are two features, the free spins feature and the re-spin. 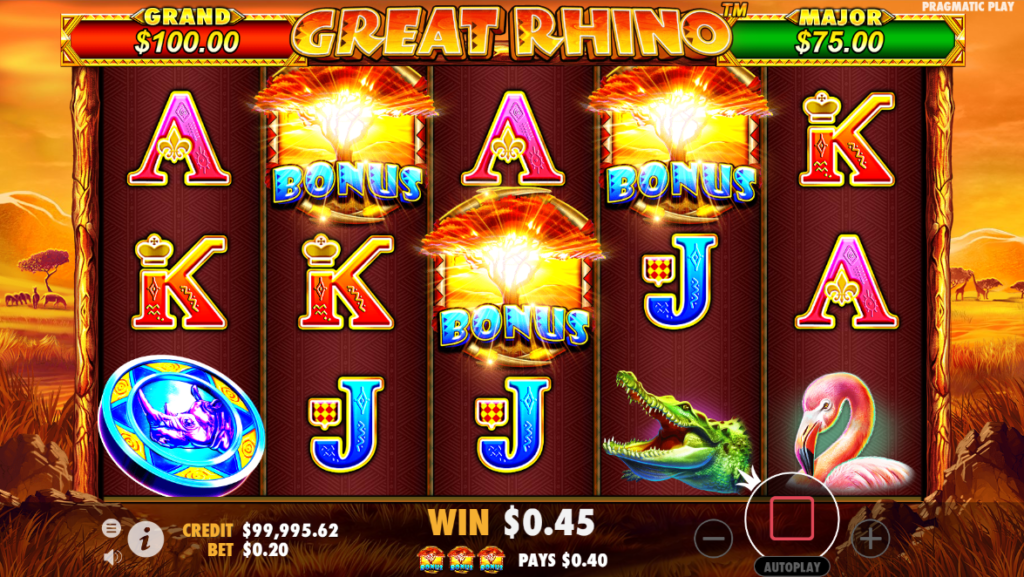 The free spins feature in Great Rhino Deluxe rewards you with 10 free spins, and is triggered by landing 3x scatters on reels 2, 3, 4 at the same time. During the bonus spins you'll notice that each rhino symbol that lands is collected. On your final bonus spin, every single rhino you picked up is dropped BACK onto the reels for your final spin. 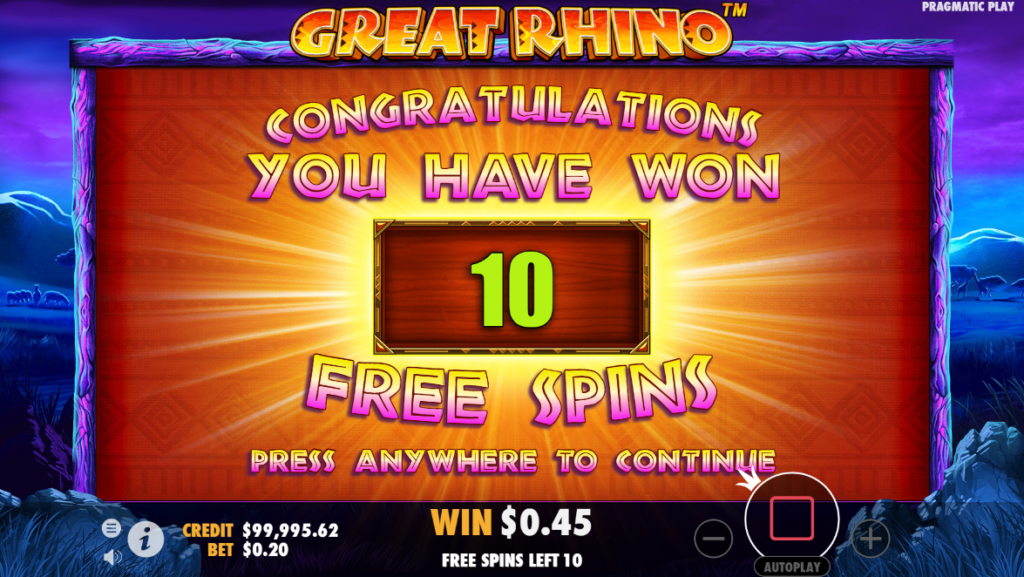 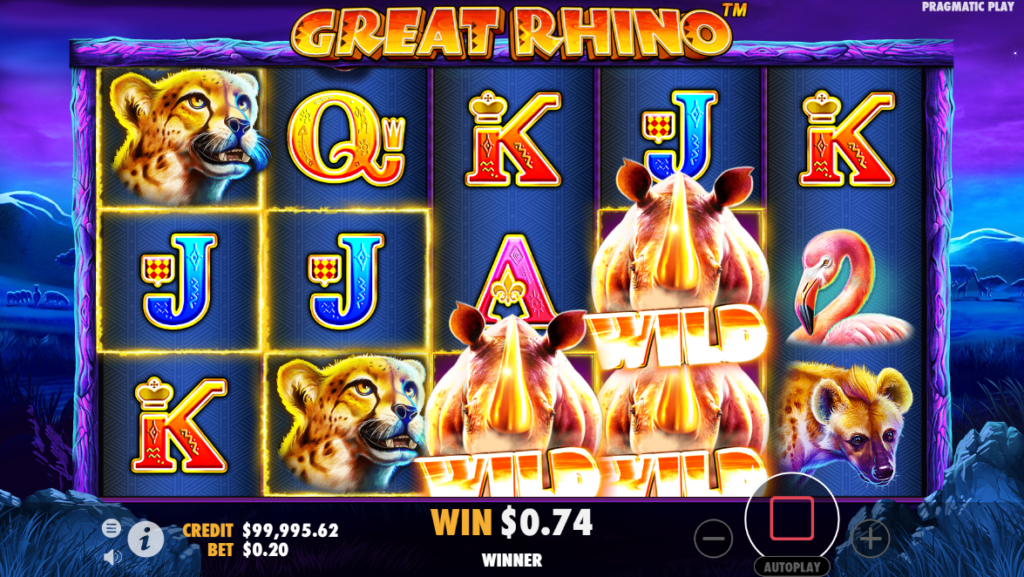 This feature is slightly more interesting than the free spins feature. To trigger the respin feature, you need to land 2 full stacks of rhino symbols at the same time. You'll receive 3 respins and the stacks are sticky, so they'll stay in place. Any new rhino symbols that appear will also become sticky and they'll give you a 2x multiplier.

Fill every space on the reel with a Rhino to win the Grand jackpot, which is 500x your wager!

Great Rhino Deluxe is the newest addition to our growing series of titles under the Great Rhino umbrella. Taking a classic fan-favourite and adding innovative new features allows us to continue to grow an exciting franchise.

“We continue to refine our craft and endeavour to create immersive slot experiences for all of our titles and Great Rhino Deluxe is no exception. We look forward to seeing how it is received by our fans and operator partners alike.