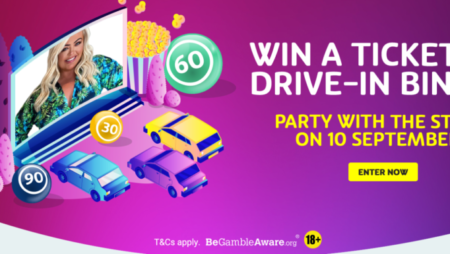 In what promises to be one of the most popular dates in the bingo calendar for September, reality queen Gemma Collins is teaming up with 90's pop bad boys East17 to host a drive-in bingo event.

Put together by PlayOJO to celebrate the launch of its brand new bingo platform, the one-off drive-in bingo event will be held at Events City in Manchester on Thursday 10th September between 8 to 10pm.

Pulling the balls and calling the numbers is none other than Gemma Collins. The 39-year old from Romford, Essex is a household name since appearing in the hit TV show The Only Way is Essex.

Providing musical entertainment and a fair old dose of 90's nostalgia will be East17. The boy band sold over 18 million albums worldwide during the early to mid-1990s.

If singing along to hits such as Stay Another Day, Steam, and House of Love wasn't enough for you, personal training lycra-clad legend Mr. Motivator will be there to boost your energy and add some fun.

The event is completely free and expected to be in huge demand. To be in with a chance of getting a free ticket, simply head on over to PlayOjo and fill out a quick form.

You must be registered with PlayOJO and over the age of 25 to win a ticket. The winner must attend in a car and anyone arriving on-foot will not be allowed in. Winners will be contacted by 8th September.

“We knew we had to launch this with a bang, so what better way to bring PlayOJO Bingo to the market than with a huge free event for our most loyal customers and bingo fans, with TV royalty Gemma Collins as our bingo caller.”

“We also have lots of exciting special guests and prizes to give away during the night in Manchester, so keep your eyes on the PlayOJO channels for updates.”