Although we like to keep the bingo news UK orientated, it's always worthwhile keeping tabs on bingo news from around the world every now and again. This is one of those occasions.

In the US, a couple from Florida has been found guilty of laundering money and conducting illegal gambling business through their ownership and operation of Racetrack Bingo in Fort Walton Beach, Florida.

Larry L. Masino, 69, of Gulf Breeze, and Dixie L. Masino, 66, of Pensacola were found to have received and laundered $5,813,584 in profit over nine years between 2006 and 2015. They conducted illegal bingo games keeping most of the proceeds for themselves as opposed to returning the proceeds as prizes, as per the law.

The Masinos ran Racetrack Bingo Inc. on behalf of a number of charitable organizations in Okaloosa County. However, the majority of the proceeds was spent on business expenses, retirement funds, employee's payroll, and personal expenses for their children and themselves.

Larry Masino, the orchestrator of the illegal bingo scheme, was sentenced to 12 months and one day in prison, with two years of supervision following his release.

Larry's ex-wife Dixie, who managed the operations from 2010 was sentenced to four months of house arrest as part of a five-year probation term.

Having already seized over $1.5 million from the Masinos’ bank accounts. the US Government claimed three properties. The Florida couple will also have to pay a forfeiture money judgement of $5,813,584.

“With today's sentencing, the Masinos will pay a high price for defrauding unsuspecting charities whose sole mission was to help others,

This office has zero tolerance for illegal gambling schemes, especially those that target charitable organizations.”

Despite the outcome, locals appeared disappointed with the supposed leniency of the sentence. 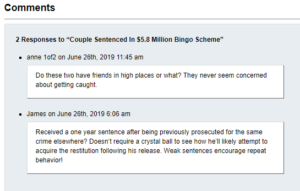 The case was investigated by the FBI, the Internal Revenue Service-Criminal Investigation, the Florida Department of Law Enforcement and the Okaloosa County Sheriff’s Office. The prosecution was led by Assistant United States Attorney Alicia H. Forbes.