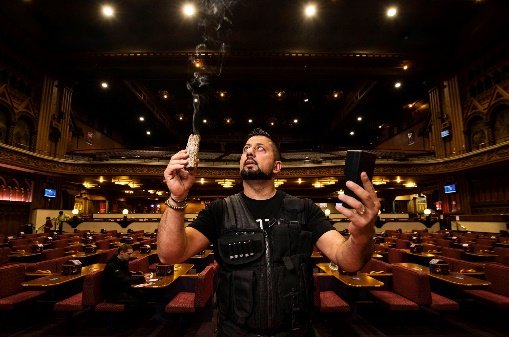 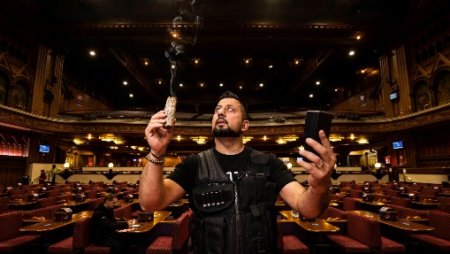 Buzz Bingo, the UK's largest retail bingo operator, has revealed that it sent in world-famous paranormal investigator and TV ghost hunter, Barri Ghai into its ‘most haunted’ club, in Tooting to help keep evil spirits away ahead of the Halloween weekend.

The Buzz Bingo Tooting venue in South London has garnered a bit of a reputation as a haunted hotspot.

Jeevah, General Manager of Buzz Bingo Tooting requested the services of the ghost hunter after both staff and players reported several spooky encounters over the years. Staff have reported hearing voices when alone in parts of the club and multiple customers have reported feeling a ‘presence’ in the gothic-style bingo hall.

Ghai performed a paranormal investigation on behalf of Buzz Bingo, who also operates one of the UK's top bingo websites, and claims the cleanse he conducted with his unique ‘hall of mirrors’ proved especially successful. Barri used his instrumental trans-communication device (whatever that is – Ed) to engage and communicate with what he believes to have been two different spirits occupying the building.

Barri Ghai said of his investigation: “The building has a lot of history, formerly being a cinema and long-running tales that someone had previously died within the building many years ago. My investigation started in the hall of mirrors and within a few minutes, I was able to detect some activity. I was able to connect with two separate entities within the space – potentially a male and a female spirit who spoke with me through my equipment.”

“I conducted the cleansing process by burning white sage – a method that has been used in spirit cleansing for hundreds of years. This is a balancing exercise and provides a more positive environment which rids the club of any negative energies. Although the spirits are not completely dispelled through cleansing, the process ensures the spiritual presence is far more positive.”

The Buzz Bingo ‘ghostbusting' follows the release of the results of a survey conducted by Buzz Bingo, who, their survey found 45 percent of the nation claim to have a connection with the spiritual world. One in three of us (36 percent) have reportedly seen an actual ghost in the form of seeing shadows when no one else was present, items being moved or going missing (23 percent), hearing footsteps when no one was home (20 percent) and even items flying out of place (10 percent).

In fact, Buzz Bingo’s spiritual cleansing comes as it finds bingo clubs feature in the top 10 locations people are most likely to have a spiritual encounter this Halloween:

Jeevah added: “Quite often we’ll have members of the team or customers telling us about a spooky encounter in the club which isn’t too surprising given the history of the building. This club’s life started back in 1931 when it opened as the Granada theatre and cinema. That’s before it became a music venue – where it played home to bands such as The Beatles, Frank Sinatra and the Rolling Stones – many of which have members who are sadly no longer with us. Luckily, we’ve never had any problems with the spirits believed to occupy the building”.

“We know our players are very serious about the game, so we want to make the environment as welcoming as possible during what’s typically a very active weekend in the spiritual calendar. And for those intrigued by the spiritual world, you know where to come this Halloween!”